rip steve jobs. i can’t imagine a world without you.

I was introduced to his inventions in eighth grade. Weedsport Central Schools installed a computer lab filled with Apple IIc and Apple IIe machines. I’d used computers before, but nothing like these. They just made sense. They worked. They inspired me.

So many things Steve Jobs and Apple made inspired, enlightened and expanded my knowledge and imagination. To learn tonight that he has passed away feels like a punch to the gut. There’s emptiness. There probably shouldn’t be. But to think how much his vision and genius impacted my life — the lives of so many — that it’s hard to categorize my feelings.

I’m typing this on a Macbook. There’s another Macbook next to me on the coffee table, as well as an iPad and my iPhone. My iPhone — I had a dream I lost it, truly a nightmare because I felt so helpless. I use it to check my various social media communities, do email, surf the web, listen to music, send texts, keep time, light my way as a flashlight. About 10 feet away is my iPod for jogging. I don’t use a stereo; my music collection spins on iTunes. In my waking hours, I’m almost always in the same room with some Apple invention, or more than one.

As a society, we lionize celebrities, rock stars and pro athletes. Their accomplishments are comparatively minimal. Tweets about Justin Bieber? Fleeting and faddish. Media orgs treating Madonna’s appearance in the Super Bowl™ halftime show as breaking news? Ludicrous. News outlets acting like something a Kardashian does means anything? Ridiculous. Steve Jobs’ contributions are wider, deeper and longer-lasting than just about anyone in this era.

I literally can’t imagine a world without everything he and his team has created. A world without him, in some way. But now I have to.

not missing the forest for the tweets.

When I was an arts and entertainment editor, I couldn’t help noticing that covering any concert, play or festival — stopping to take notes and mentally write the piece — took away from the enjoyment. And sometimes I wonder if stopping to tweet, post photos or status-update that which is happening also detracts from appreciating the experiences at hand.

This Saturday, a long trip to Rochester and a very full day, was an example. The trip featured lunch with fellow Brockport grad Kelly Sabetta of Betta Book Publishing at Jay’s Diner, meeting @LoriPA of the University of Rochester, a visit to the Boulder Festival in South Wedge and the headline event of a concert by The Tragically Hip in the Highland Park Bowl. What I didn’t do was describe every part of the day on Twitter or Facebook. Oh sure, I posted some photos and did the occasional tweet, but generally doing things, being in the moment, took precedence over describing the action less than 140 characters at a time.

Hip lead singer Gordon Downie could have stayed dry, but chose to get drenched with the fans.

Earlier in the day, I was moving too fast to pause and pull out the iPhone to post. Later, the weather cooperated by not cooperating. After The Tragically Hip’s first few songs, the rain started coming down, harder and harder. Harder still is the ability to take photos in a deluge, let alone with a drenched iPhone as the rain soaked through any and every pocket. Even getting something poignant like Hip lead singer Gordon Downie choosing to come out from under the canopy to play in a downpour and show solidarity with the fans became difficult.

But you know what? There’s nothing wrong with putting away the iPhone and enjoying the concert. Which is what I did. So without all the picture-taking and tweeting and Facebooking, I could just concentrate on having fun. And perhaps that’s the way it should be.

Long before people curiously decided Twitter was the next killer business app, it was a social-media site for sharing experiences. In that vein, when my Facebook status Saturday pondered live-tweeting that day’s wedding of my friends Fred and Michele, other friends unable to make it asked me to keep them updated on the festivities.

I’ll say this much: Live-tweeting a wedding is more difficult than doing Commencement or any number of other activities. The wedding of Fred and Michele (or @fredvigeant and @mjoyner, if you prefer) unfolded in St. Mary’s in Oswego, a beautiful church with soaring architecture and large stained-glass windows. What it doesn’t have is the kind of light you’d like for iPhone pictures. Thus attempts to photograph the bride may look like this:

Fig. A: Here comes the blur.

Or, if you’re lucky and steady, this way: 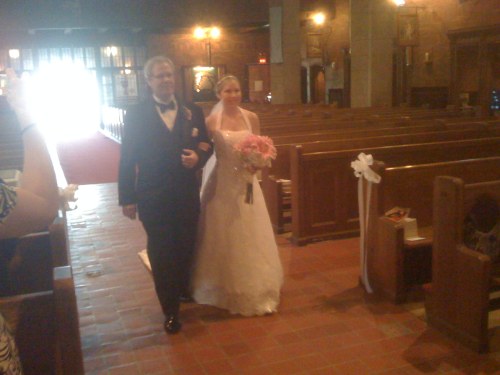 Fig. B: This is better, despite the back light and low ambient. Those who saw it live-tweeted at least appreciated it.

Pictures aren’t the only challenge (and I did collect enough for a Facebook photo album). When typing the info to provide context on the live-tweet (preferred to just throwing a link on Twitter), I sensed others looking at me funny. Texting or typing in a church isn’t broadly embraced … and I don’t want to become that guy who obliviously and rudely focuses on his personal electronic device when he shouldn’t.

Other miscellaneous notes: In case you’ve ever wondered, it’s not easy to catch the Electric Slide on an iPhone:

Or here’s a curious one: Someone else’s flash impacts the ability of the iPhone to properly process the image. Or I could say the reception lighting was just very odd:

But sometimes, if you have the right light, the right subject and the right moment, everything does come together:

Being able to send this picture, showing Fred and Michele veritably glowing in the aftermath of the wedding ceremony, pleased a lot of people following my updates. And, in the end, sharing such meaningful experiences is really what social media can do best.

On Saturday, SUNY Oswego joined the vanguard of colleges live-tweeting Commencement, as I posted updates and photos throughout the two-ceremony day at our Twitter account twitter.com/sunyoswego.

The good news is that it’s pretty easy to do. Any mobile device with Web access to provide running commentary is all you need. It’s a bonus to have a device that also takes photos, such as my iPhone, to provide the proverbial 1,000 words to followers. Camera phones mean a lack of zoom and depth of field, so you may have to count on panoramic shots or the occasional blur. The ability to get in there for behind-the-scenes views, serendipitous shots and hammy bits of joy — and to communicate instantaneously — is quite the payoff. (You can also collect ’em all into a Facebook photo album later.) Remember that if you’re live-tweeting photos, a short compelling description will let people decide whether to click the image link.

LiveTweet 1 had room for improvement. My Commencement responsibilities include media relations (most notably having C-SPAN in the house!) and managing ushers, so such other duties probably got in the way of posting content. Having the luxury of a person dedicated entirely to live-tweeting probably makes for better output. I also decided late in the game to live-tweet it, which meant we didn’t do a lot of pre-promotion.

Still, I was quite happy with the feedback. Several images/links were retweeted, always a sign of appreciation. Alumni tweeps commented on how much they enjoyed their graduation, current and future students tweeted questions and comments, and @sunyoswego saw a jump in followers. So I definitely think it was worth the effort … but I’d say that even if it helped just one more person enjoy such a glorious, momentous, joyous day.

EDIT/UPDATE: Icing on the cake = Oswego County Today, a local online-only daily, did a story mentioning the live-tweeting and using a couple of the posted photos. Who says social-media projects can’t cultivate positive press coverage?

Sometimes it takes the strangest convegences to move you forward with technology. I bought an iPhone over the weekend, but may not have if not for a mysterious hardware failure, running over a garbage can and another college’s apparently inept sports information office.

No word on whether Junior the iTouch and Olive the iPod Mini are jealous of TheHip, the newest member of my Apple family.

Hardware failure: I flipped open my old cellphone on Friday and the display was dark with just a couple of pinpricks of light. This clearly was not good.

Garbage can: The women’s hockey coach and I split trash service, and the garbage guys throw the can into my driveway when done. On Wednesday, while dealing with a fresh snowfall, I thought I could cut an angle around the can. I couldn’t. It wedged under the vehicle, requiring some back and forth to get it out, and my car still smells of burning plastic.

Sports (lack of) information: The aforemetioned women’s hockey team, for which I’m a faculty mentor/big fan, would clinch a playoff spot on Friday night if Chatham lost at Neumann. In The Raven later that night, I borrowed the bro’s iPhone to keep checking collegehockeystats.net to see if the Lakers could seize the historic moment. Except that Neumann wasn’t getting the information online, so I waited and refreshed, over and over.

This, then, is an ex-garbage can.

While waiting for the score (Chatham lost, Oswego made the playoffs), my brother gave an impressive sales pitch for the iPhone, since I needed a new phone anyway. Sure, the AT&T data package would be more expensive than the Sprint cell service, but the ability to access the Internet anywhere offers a huge upside. True, I own an iTouch, but that’s at the mercy of WiFi availability, and I don’t live in the most wireless-enabled area. The idea of converging so many useful functions into one device seemed quite compelling.

The garbage can comes into the equation because buying a replacement meant I had to drive to the Oswego Lowe’s (I’m still boycotting Wal-Mart) Saturday morning, and in the same plaza sits an AT&T store offering iPhones and related services. I was probably the guy’s easiest sale that day because I had done my homework … all I really needed to do was get in the door.

Paying the $299 for TheHip, as I call the new 16GB iPhone, wasn’t as much of a consideration as the data plan. The cheapest available is $69.99 per month, plus $5 for unlimited text … plus taxes and fees take it to the north side of $90/month. My initial rationalization is that I paid off my SUV early and don’t have that monthly payment, and could probably ditch the $19.99/month for my Dreamscape email/Web hosting … so many free options exist now.

While I like the apps (which I had with my iTouch), the coolest thing right now is the address book. I can put in friends’ cellphone numbers and email addresses and can choose to either make a call, text message or email all from one device. Consider me a sucker for convenience.

I have to say one moment Monday morning was cool too. Instead of putting a cellphone in one pocket and the iTouch in another, I just grabbed one device. Somehow things felt … simplified. Calming, even. However strange the path to the iPhone, that feeling of convergence seems priceless.