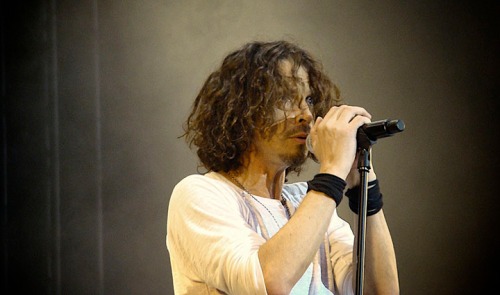 Pained yet poised. Cracked yet composed. Forceful yet never forced. For many people of my age, we can remember the first time we heard the voice of Chris Cornell, coming from our radios sounding like nothing else. Ultimately: Stunning.

But even that was not as stunning as the news this morning that the former Soundgarden lead singer, a man who helped change the face and tone of music, is dead at a young 52.

David Bowie and Prince were huge losses to the musical, and mainstream, world. But the death of Chris Cornell feels like losing a friend who helped you through some low times.

Often I would crank up Soundgarden’s Down on the Upside (my personal fave) and let their modern rock that channeled classic blues drown out whatever inadequacies I felt at the time. The lyrics from “Burden in My Hand” — “fear is strong and love’s for everyone who isn’t me” — was a signature lament during about a decade of young adulthood as I struggled with self-loathing and anxiety. In Chris, I had a channel for the thoughts I could not formulate, a partner to help me collect myself to overcome.

David Bowie and Prince were superstars, celebrities on another plane. Chris was somebody who could walk into your corner bar and throw back a few drinks as unobtrusively as his quick background “Singles” cameo.

After Nirvana’s “Smells Like Teen Spirit” became a smash hit, Soundgarden could have just recorded a love ballad or two, or a safe pop record, and cruised into retirement with enough money to spend freely … and to also buy the Sonics and bring them back to Seattle. They had hit albums, singles that sold well enough (without selling out their sound) and millions of fans. And inspired dozens, perhaps hundreds, of other bands.

And then they broke up 20 years ago, the creative tensions that helped forge such heavy and edgy music too much to stay together. My brother used to live in Seattle and said it was huge news there at the time, even as so much of the world had moved on to whatever new sound was the flavor of the month.

The man voted Guitar World’s “Greatest Rock Singer” kept on creating, singing and playing — first solo, then bringing together Audioslave for a good run, then eventually reconciling with Soundgarden, even if their 2012 album King Animal seems more like a footnote compared to the sweep of their work two decades earlier.

But his work from the brief 1991 collective Temple of the Dog, honoring former roommate and Mother Love Bone singer Andrew Wood, is what stays with me as a fitting epitaph:

I never wanted
To write these words down for you
With the pages of phrases
Of things we’ll never do
So I blow out the candle, and
I put you to bed
Since you can’t say to me
Now how the dogs broke your bone
There’s just one thing left to be said
Say hello to heaven

Commencement ceremonies: From the 12th century until …?

Imagine that through some divine provenance the founder of your college or university was allowed one day to see their creation in 2017. Much of it would look quite strange and incomprehensible. Yet if they strayed into your graduation ceremonies, these rituals would appear quite familiar — even if your college was founded in the 18th or 19th centuries.

In his monumental series “The Day the Universe Changed,” science historian James Burke said that rituals are ways that societies and institutions can make episodes of change feel comfortable and supported. Think about wedding ceremonies: The addition of hashtags notwithstanding, the way most couples tie the knot has not changed much in centuries. Ditto baptisms and funerals. And commencements.

Commencement ceremonies date back to the 12th century, and while they no longer proceed in Latin, the graduation gowns don’t necessarily look dissimilar. But tradition holds its strongest sway in things most formal:  The suit that hundreds of men (me included) will wear at this weekend’s commencement ceremonies date back to military formalwear of a bygone era; their cut and style may change but in 100 years you would likely see something similar at weddings and funerals and graduations.

But will we still have commencements then? When people can telecommute or technologically be present anywhere in the world, will the class of 2117 still be in the same large halls as trumpeters, robes and parades of academic regalia?

I’m betting we will. We’ve already gone through a couple of decades of the fastest technological evolution in history and what has changed about graduations? With the exception of live web video streams, not all that much. Some bold colleges have played with things like hashtags and near-real-time photos appearing on big screens, but that’s window dressing.

Sure, students can tweet, stream, post, gram and snap during the ceremonies, but they still do so while wearing a robe, then accepting a diploma frame and handshake from some prominent official and strolling down a ramp, beaming toward the audience celebrating their amazing accomplishments.

In the 21st century, as we spend more time online, study after study finds people feel lonelier and more disconnected than ever. That’s why our social and community gatherings, especially those ones rooted in tradition, become more important than ever.

The more some things change, the more they stay the same. It will be interesting if future historians will look back upon this year’s graduation ceremonies and see it as something comfortable and familiar.