With so many boring, forgettable and lookalike TV ads, it’s rare that one just grabs me and makes me not only want to pay attention, but delve into its world. So I was exceedingly pleased when this promo for the BBC America show “Copper” (with excellent placement during extremely popular “Doctor Who”) captured my fancy:

As arresting (pardon the pun) as its visuals are, the song selection jumps out as perfect and haunting. That’s Iron & Wine doing a gorgeous cover of Stephen Foster’s “Hard Times Come Again No More,” a parlor song from the mid-19th century — the time where “Copper” is set in New York City’s teeming, tussling and corrupt Five Points neighborhood. Sam Beam’s voice and the lyrics craft a simultaneously mournful and hopeful tapestry, depicting a time when the country was divided and bloodied in the Civil War and yearning for a light at the end of the tunnel. (The song is also building buzz in the music press.)

The visuals themselves are unforgettable: The cinematography, gritty and compelling, paints the series perfectly. From the scenes, you get just a hint of what’s going on, not too much but enough that you want to learn more. It helps that it’s teasing a series rich in character, plot and action.In class I talk about the importance of calls to action, and whether content we see moves us to do something. Well, this is what this spot has done:

Normally I say that a TV spot should include multiple mentions of its product (audio and video) to be more effective, but for outstanding examples you throw the rules out the window. This promo grabs you for its full minute, pulls you into its enthralling world, and leaves you wanting more. I love it. And it’s already moved me to action in two directions. That, then, makes it very successful.

For all the discussion on campuses, at conferences and in corporate cubicles about which social media channels are reliable or “the next big thing,” one fact remains: Without good content, your channels are not useful.

This lesson jumped out while I worked on our web and social media analytics report for March. Usually Pinterest drives virtually no traffic to oswego.edu (less than 50 refers per month) yet suddenly, for March, we had 1,076 referrals. Does this mean Pinterest had suddenly broken through to undeniable relevancy? 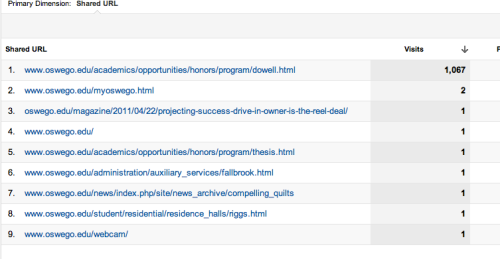 Not exactly. Almost all of that traffic (1,067) went to one page — a piece by Norman Weiner, emeritus director of our honors program, called How to Do Really Well in College. This was not the first time this page brought out-of-left-field traffic from a social network, and it appeared from several boards across Pinterest offering college advice.

For several months straight, StumbleUpon was always our third-biggest social referrer (behind Facebook and Twitter), except this month when Pinterest pushed it to fourth. What drives almost all of that StumbleUpon? You guessed it, How to Do Really Well in College. Weiner said he hears often about other colleges using it, and stats show now it has spread into the social sphere.

So those two channels have been viable traffic providers only because of one piece of content. How to Do Really Well in College is our 39th most-visited page on oswego.edu, and almost all of its traffic involves straight entries from offsite, many from social media referrals. As if we needed proof that content drives channels and traffic, not vice versa.

So I’m amazed about people always running to the newest, shiniest social media platform without any content strategy … it’s like deciding you’re going to open a business without any idea what you plan to sell. Content that tells stories — in text, photo or video — is the building block of every channel. That’s what you should pay attention to, first and foremost.

Crowdsourcing a cover shot? Sure, why not.

We’ve hoped to make the SUNY Oswego Facebook page more interactive without resorting to irrelevant claptrap (“How do you feel today?”), lame contests (“be the 14,000th to like our page and we’ll give you a prize, showing we don’t care about the first 13,999!”) or other gimmicks. So when suddenly an odd idea popped up to fit a content need, I decided to go with it.

The page still had a cover image of a snowboarder from the semi-recent Rail Jam, and as I pondered a spring shot to replace it with, I realized this would be a great time to get our tech-savvy and photo-passionate audience involved. So I posted*: “While we love our snowboarder photo, we feel like it’s time for a spring cover shot. Have any great images of campus in the spring? Post them on our wall, and maybe we’ll use yours (with credit, of course) as our next cover banner!”

[* Scott Stratten of Unmarketing would probably note that some organizations first would have to put together a committee to establish a focus group to test the message before posting it. I’m glad we can go with the flow for such things.]

The first post was a picture of a blizzard, followed by a good-natured jab or two about spring only lasting a week in Oswego, but before I had time to wonder if what seemed a decent idea would swirl down the drain, people started posting photos. Some pretty darn good photos, actually. Often sunsets, but some flowers budding and even a rainbow. Sweet!

Finally, after about 24 hours of collecting, we chose a winner:

We posted it with the promised photo credit but also kept open turning some of the others into cover photos down the line. And maybe we’ll do this from time to time to see what happens. Pretty decent reaction: 165 likes, four shares and a few comments from alumni missing the famed sunset view. 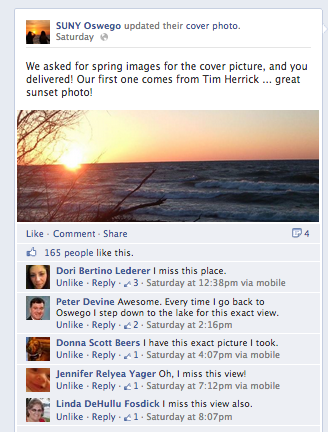 It isn’t rocket science or a major innovation, I know. It’s a small thing, and I’m sure some way-too-serious sort is questioning the ROI of something that took a mere couple minutes. But it also isn’t cynically using your audience as pawns to get to an arbitrary number.

Anyone running a Facebook page will have content needs from time to time — photos are often a big one — so why not see what’s out there? There’s a pretty good chance your community has, or is willing to create, plenty of awesome! And in the process it becomes even more their community.