What higher ed can learn from an underdog wrestling promotion.

You may be rolling your eyes already. You’ve been subjected to hundreds of “what higher ed can learn from ________” posts by now, and here’s another asking what you can learn from a so-called “fake sport” usually playing out in front of a few hundred fans.

Turns out, we can learn quite a bit from anything … including organizations like 2CW wrestling, which touched down in Oswego last week.

That’s pro wrestling veteran Spike Deadly about to hit an opponent with a chair … in the crowd, a few feet from us.

Look, if you work in higher education, there’s a greater than 99 percent chance you don’t work at Harvard or Yale. Odds are you feel underfunded, understaffed and underappreciated. So you can pout about it or you can do what the wrestlers of 2CW do, which is go out and give 100 percent and always think about their audience.

To use a very strange simile, WWE is the Harvard of sports entertainment … the most prominent and known brand in its field. They are flush with success by many metrics, yet follow the #wwe tag during any major pay-per-view or read posts in a group like Anti-Cena Army and you’ll find many disappointed and disillusioned fans fed up with shows that are more talk than action, lazy performances by some superstars and the organization’s reluctance to push newer talent while propping up the same, usual celebrity wrestlers.

2CW knows they won’t topple WWE, but they know their scrappy performers can put on a better show. And that everyone in their organization can share the goal of being fan-friendly.

I attended because my graduate assistant for video, Kevin “The Man” Graham, is in a long-standing 2CW tag team with a gent named Punisher Van Slyke. While the event seemed potentially interesting going in, the level of skill, punishment the wrestlers took and the overall passion far exceeded what I imagined. For what some would term a “fake sport,” the wrestlers take a lot of bumps — we saw people thrown into barricades, body-slammed onto very thin mats atop a gym floor and fly through the air in death-defying maneuvers. One wrestler suffered what looked like a legit knee injury, wrestling through it before getting ring assistance that appeared quite real and concerned.

Unlike often-uninspired WWE blowout bouts meant to pump up a star, every 2CW match was evenly contested, full of two-counts and constant swings back and forth. When fans talk about “telling a story in the ring,” these entertainers had it down. Fans are encouraged to take and post videos of live shows. 2CW often will host a former superstar like Spike Dudley (in Oswego), Matt Hardy, Hacksaw Jim Duggan or John Morrison as a headliner to get extra notice. But most of its stable are hard-working independent wrestlers or people with day jobs … or, in Kevin’s case, completing his master’s in HCI in Oswego.

Wrestler Spike Dudley grabbed my friend Jason’s Coke can, smashed into an opponent’s head and signed it later. “The best $1.50 I ever spent,” Jason quipped.

And the crowd was really part of the show. During a falls-count anywhere bout, I found Dudley getting his face twisted by “Juggernaut” Jason Axe right in front of me in the middle of the crowd. Dudley later hit him with a chair a couple feet to my right, then borrowed my friend Jason’s can of Coke to smash it on Axe’s forehead (Dudley signed it later). Face wrestlers (good guys) regularly high-fived and shook hands with the crowd going to or from the ring, while heels (bad guys) routinely argued with or exchanged insults with delighted fans. After their match, wrestlers went to the merch table to chat with fans and autograph anything. I don’t think The Rock does that at WWE live events.

In whatever we do in higher ed or business, do we offer that level of fan-friendliness? If not, why not? Some of these wrestlers traverse the highways and byways of America, town to town, hoping for their big break somewhere else, and may never see Oswego again … so why shouldn’t we prioritize pleasing students, faculty, staff, clients or customers who we want to come back happy again and again? We should think about giving our all the way these grapplers did … but how many people watch the clock and avoid doing anything meaningful on the job from time to time because they don’t feel like it? Everyone we serve deserves our best, any day and every day.

As for Kevin, it was a very good night. He and Punisher wound up with an unexpected shot at the 2CW tag-team titles. After a long, hard-fought match, Kevin hit a top-rope maneuver and scored the three count as the duo recaptured the gold! Since they weren’t billed as wrestling for the title in pre-promo materials, perhaps it was a hometown favor, showing the local boy made good. Whatever the motivation, the crowd loved it and the title change made the night more memorable for everyone in attendance … including Kevin’s mother! When you talk about making memories and pleasing people, hard to imagine doing it much better. 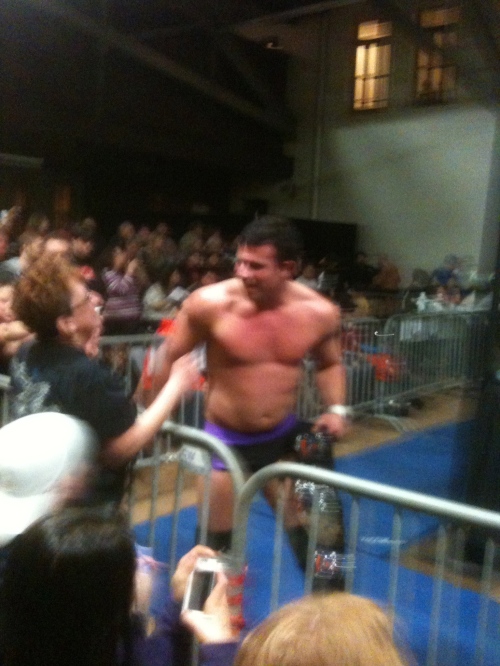 Kevin “The Man” Graham (known in some circles as my grad assistant) celebrates winning the 2CW tag team titles with a very special audience member … his mother. Just one more thing to make the night memorable.

The branding of blizzards and the commodification of catastrophe.

In the media swirl around Winter Storm Nemo, many wondered why blizzards suddenly had names, like hurricanes have. Simple: It’s part of a new branding strategy by the Weather Channel. We have names like Nemo because it’s all about the Benjamins.

Hurricanes and tropical storms have been given names since the 1940s. … Important dividends have resulted from attaching names to these storms:

Finally, it might even be fun and entertaining and that in itself should breed interest from our viewing public and our digital users. [Emphasis mine.] For all of these reasons, the time is right to introduce this concept for the winter season of 2012-13.

In this lesson on branding 101, the most important bit is that “should breed interest from our viewing public and our digital users” part. Translation: Branding storms will raise ratings and readership, which means higher revenues. Getting attention for your business is much easier when you have a well-defined and memorable brand, and storms are no exception. This comes, after all, from the media company that brought us the “See Friends at Risk in Severe Weather” feature. (And who finds a storm bearing down on them “fun and entertaining”?)

And “Nemo” is a stronger brand than “winter storm.” It’s easier to sell a weather disaster with a name, especially a cute one with a pop culture reference. Calling it Nemo launched a million “finding Nemo” and “just keep swimming” references and related memes. What about reasoned discourse over this storm? Ain’t nobody got time for that!

Branding storms and creating added media attention also help spread one more thing: Panic. With Nemo, like Sandy this summer, the Twitterverse filled with tweets in the order of “[College hundreds of miles away from us] cancelled classes. Why won’t my school? Don’t they care about our safety?” When you’re hoping for the shared experience of the brand Nemo, little things like geography and meteorological factors are less relevant than the feeling of being left out. Lining up for the sequel to Extraordinary Popular Delusions and the Madness of Crowds, it’s as if, to paraphrase Death Cab for Cutie, the world was flat like the old days and storms can travel just by folding a map. (Disclaimer: I never fault my college or any institution for closing in the name of safety. Ever.)

Perhaps one positive offshoot could be a return to hyperlocal coverage with the volume turned down on hype. When he gave a revised and reasoned forecast on Nemo late Thursday, 9WSYR meteorologist (and SUNY Oswego alum) Dave Longley had a rather remarkable statement on his Facebook page:

I NEVER write a forecast for ratings or what I think people want to hear. I write a forecast based on the information that is presented and how it might impact CNY. I put everything into each and every forecast and I live each forecast to the end. That is my commitment to you the viewer and me as a scientist.

This, then, is where the Dave Longleys and the scientists of the world diverge from the Weather Channel, which is selling branded infotainment. Seems like it’s only a matter of time until “I Found Nemo” T-shirts crop up in their online store.