thursday travelogue: las vegas: everything is possible but nothing is real.

Others have filed great recaps of the outstanding #simtech10 conference in Las Vegas, so I figured, as an urbanist, I could file my thoughts on our host city. No other place has such a pervasive and glitzy ad campaign, telling people that what happens there, stays there. It’s a casually well-crafted image.

And yet, leaving Las Vegas, I knew I would not miss the city. My friends from the conference I would — and do — miss tremendously, but Las Vegas is too loud, too brash, too in-your-face, too crowded … just too much. Every block on the strip involves running a gauntlet of card-slapping hired hands trying to push strip clubs and prostitution. Coupled with the slow-moving tourists and the overstimulation of sights and sounds, it resembles some kind of smoky, seedy video game.

Oh sure, I can recommend all kinds of things. Dollar drinks and the crazy karaoke characters at Bill’s Gamblin’ Hall and Casino were a hoot. Our group dinner at Bradley Ogden in Caesar’s Palace was quite possibly the most delicious (and not coincidentally, most expensive) I’ve ever had. Our hotel, The Paris, was inexpensive and features the awesome Napoleon’s Dueling Piano Bar and fantastic Le Village Buffet, among other attractions.

And yet one of my lasting impressions came from taking a 6 a.m. run with some friends, which seemed like being backstage at a carnival. People are still out drinking or stumbling in at that hour. You can see senior citizens sitting at slot machines — were they still there from the previous night or getting an early start? And cleaning crews attempt to take care of some of the profuse of refuse from the previous day’s carousing.

One thing the ads won’t show you is that, among the revelry, you can feel an undercurrent of sadness in Las Vegas. The unemployment rate is a staggering 15%, evidence of what happens when a boom goes bust. While the hustlers crowd the more unfortunate panhandlers off the strip, you can find people begging, busking or sleeping on overpasses and in the city’s less glamorous areas. And if you gaze at people mesmerized by slot machines for hours, blank expressions make you wonder if the machines sucked their souls along with their cash.

I started this entry with Las Vegas favorite son Brandon Flowers, but will paraphrase the band Living Colour for my succinct summation of the city: It’s a place where everything is possible but nothing is real. Decadence walks beside despair, splendor sits aside sorrow. The city runs rife with contradictions, of soaring reveries and dashed dreams. The one truth is that, ultimately, the house wins, and it’s mainly the city promoters laughing all the way to bank.

I’ve returned from my first full HighEdWeb conference (#heweb10), also full of other firsts: First time riding a mechanical bull, first time petting a penguin or shark, first time singing karaoke in a gay bar. The conference was full of win (not just two victories in Just Dance or our luck-infused undefeated record on the pool table at Madonna’s) as great information and connections virtually poured like Skyline Chili over pasta. I could never, in manageable length, blog about every takeaway, so I boiled it down to a top five.

1. People matter. Yes, we talk about tools and technology all the time, but this business is really about people. One of my favorite lines came from Mark Greenfield, on institutions not being brands or logos; they are all the people who attend (or attended or want to attend) that college or work at it. This ties in with my love for storytelling as well, and underscores that we’re really in the people business. Also, the conference is about meeting, interacting and learning from some of the best damn people on the whole planet.

2. Use it or lose it. Any conference where the keynote speaker is the king of usability, author Steve Krug (“Don’t Make Me Think,” “Rocket Surgery Made Easy”) is bound to teach a thing or two about creating user-friendly websites and why we need to test them to ensure they work. Krug is great at disarming all the usual excuses people (including me) have and essentially said: If you’re going through all this trouble to make a beautiful and rich website experience, is taking steps to ensure it works too much to ask?

3. Location, location, location. Given the explosion of geosocial media, I anticipated more sessions about location-based at the conference. But Tim Jones from North Carolina State did marvelously with a 45-minute overview that also showcased some neat things his college is doing … and a cross-platform aggregator they plan to launch. QR Codes and related services mentioned elsewhere offer tantalizing potential: Imagine a campus tour where a smartphone accesses text, photos, videos and other context from a chip on a building, or a code at a theatre performance gives more interactive information about the play, actors or academic program.

4. Count it up. One of my goals is to better understand and utilize analytics tools (where next week’s Stamats SIMTech also will help). Many robust and free services giving you figures exist, and Kyle James particularly brought it home simply with things to look for in your analytics to help improve your site (i.e., what gets hit most often and from where, whether people find what they want or bounce from your stie, what throws up the most 404/page not founds). Figures to back up decisions and new directions can prove worth their weight in gold.

5. Count your blessings. Yes, working in web communication is no picnic. We’re asked to do a lot with few resources. Deal with frantic emails that want things yesterday. Shudder at the mention of words like “meeting” and “committee.” And yet. Working with the web means what we do matters. It’s the medium of choice for most prospective students, general users seeking news/information/entertainment and some 500 million Facebook users. The web and what goes on with it is only expanding, so it’s an exciting field. And, as I learn every time I’m blessed enough to attend a conference like #heweb10, the field abounds with awesome people who are incredibly generous with their time, advice and energy.

when a website goes live, it doesn’t go dead.

Over the weekend, we began rolling out the new web design for oswego.edu to a pretty good reception. The design portion of the project — from first comps to launch — took less than three months, an exceedingly short window in higher education, so it has been quite a rush. But throughout the process I’ve emphasized that the new look is only a first step. 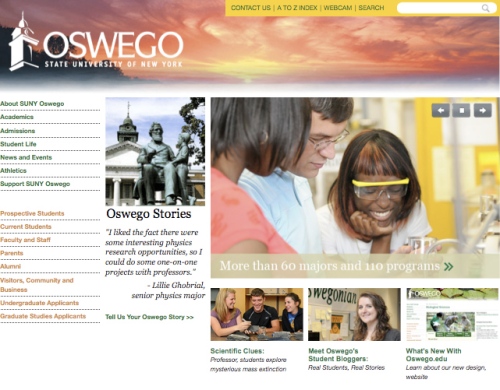 What we really wanted was a look that was cleaner and less cluttered than the previous design, which had a lot of colors and tables and suffered the misfortune of aging the way anything does in seven years web time. The new look is a skin we’re putting over pages migrated into our new content management system, Ingeniux, which topped some 200 other contenders (when the CMS team started) in large part through ease-of-use for our nearly 300 campus editors. But it’s also a powerful CMS we’ll tap more in the future.

As we were tasked with having the new design up before the Admissions cycle heated up this month, and since we have a huge site with a short window to get this far, some of our old pages remain in our old look and CMS. We continue the migration, but people can still find pages with this look:

In the new site, we try to play up the use of large photos (500 px by 205 px) first proposed by the freelance designer who did the makeover. Feedback from more than 200 incoming students pointed toward a preference for simplicity and a strong visual sense. Adding components (reusable blocks of content) in the right side can help make our pages more dynamic: 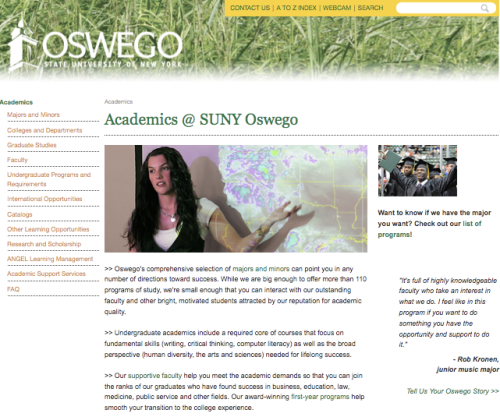 But there’s much left to do. We had to make some hard decisions about what we could complete before relaunch, and what we knew would still need work. We don’t want to throw everything into Tales From Redesigned Land’s mythical Phase 2 black hole; we’d like to keep working hard to make the website better on a daily basis. Stewart Foss of eduStyle calls it incremental redesign, and I’m a big believer.

The phrase I use, blunt as it is: When a website goes live, it doesn’t go dead. Everyone working in the web, imho, should think that way. We’re always tweaking, editing, looking to improve. Every day is a new opportunity to make things better than the day before.